The Color of Revenge

The Color of Revenge (German: Die Farbe der Rache; formerly known under the working title Ink and Mirrors)[2] is an upcoming book written by Cornelia Funke. It will be published as a physical book, but may potentially be distributed in audio form.[3] It will also tie in to Funke's MirrorWorld series.[4] In November 2016, Funke estimated a tentative release date of 2018.[5] 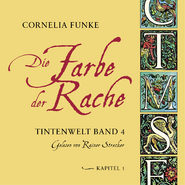 Cover for the German audio book of the first chapter.

An illustration by Cornelia Funke of Jehan.

An illustration by Cornelia Funke of Farid.
Add a photo to this gallery

Retrieved from "https://inkheart.fandom.com/wiki/The_Color_of_Revenge?oldid=11173"
Community content is available under CC-BY-SA unless otherwise noted.