Inkheart is a film adaption of Cornelia Funke's Inkheart, directed by Iain Softley.

Film description. What they also share is an extraordinary gift for life when they read aloud. But there is a danger: when a character is brought to life from a book, a real person goes into the book.[edit | edit source]

Meggie has lived with only her dad, Mo, for as long as she can remember and their lives have always been filled with books. On a trip to a secondhand book shop, Mo runs into someone he hasn't seen for years. It's Dustfinger, a character from Inkheart, a book that means more to Mo than Meggie thinks. Dustfinger asks Mo to "read him back into the book", but Mo and Meggie quickly leave. They go to stay with Elinor, Meggie's Great Aunt, who also has a passion for books. While they are there, Mo tells Meggie the whole story: he has the power to read things in and out of books, and ten years ago, he read three characters out of Inkheart, and Meggie's Mother, Resa (Sienna Guillory), vanished into the book.

Unfortunately, Meggie, Elinor and Mo are captured by the villains of Inkheart, Capricorn and Basta, who Mo read into the world. Capricorn takes them back to his castle and forces Mo to read things out of books for him. Mo accidentally reads out Farid, a boy from The Arabian Nights. Luckily, they, Meggie, Elinor, and Dustfinger escape together. In a small Italian village, they find the author of Inkheart, Fenoglio, who is overjoyed to hear about his story coming true.

Dustfinger tells Mo that Resa is working as a maid in Capricorn's castle, having lost her voice when a man with the same powers as Mo stuttered while reading her out of the book. Meanwhile, Meggie finds out that she, too, has the power to read people in and out of books. The whole group, including Fenoglio, returns to the castle to rescue Resa, but Capricorn imprisons them again. He forces Meggie to read out the Shadow, a monster from Inkheart. Before the reading, Fenoglio writes new words fore Meggie to read instead. His words cause the Shadow to kill Capricorn, and his henchmen. After that, the Shadow explodes. After going back to Elinor's house, Meggie grants Fenoglio and Dustfinger's wishes to be read into the book. THE END.

All chapter titles are as they are listed in the Blu-Ray.[1]

1. Silvertongue on a Search[edit | edit source]

11. End of Their Stories[edit | edit source]

17. Fate of the Disobedient[edit | edit source]

This is an incomplete list of references in the film in order of appearances: 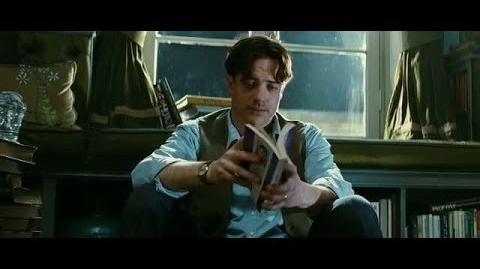 Retrieved from "https://inkheart.fandom.com/wiki/Inkheart_(film)?oldid=10946"
Community content is available under CC-BY-SA unless otherwise noted.